Item7851 for doc work on extensions that are not part of a release. More... Close
• Anything you create or change in standard webs (Main, TWiki, Sandbox etc) will be automatically reverted on every SVN update.
• Does this site look broken?. Use the LitterTray web for test cases.
Something has recently changed on the PatternSkin CSS so in Firefox 2 under XP the lower part of the letters like g and j are bitten off in the left bar This makes the text hard to read and ugly It was fine just a few weeks ago. There is also a new gap between the webname and the loginname which I am not sure if it is intentional. 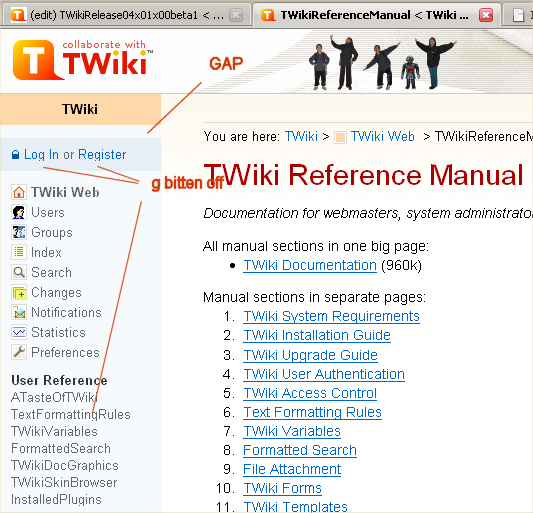 KJL As I don't have access to XP at this moment I can only fix what I see on Windows 2000. The cutting of characters is fixed now, but I don't see the gap. AC The 'g's are OK now. And the gap is caused by the Build script which replaces the first META line in all topics by a blank line. I will raise a bug item on that Setting to closed. KJL