Item7851 for doc work on extensions that are not part of a release. More... Close
• Anything you create or change in standard webs (Main, TWiki, Sandbox etc) will be automatically reverted on every SVN update.
• Does this site look broken?. Use the LitterTray web for test cases.

The following code should provide this result (screenshot ) 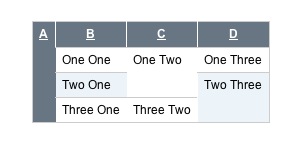 and works as expected (matches screenshot) twiki.org. It doesn't work as expected at develop.twiki.org. (It also fails at my Company, where I am trying to understand why!) -- TWiki:Main/VickiBrown

- 01 Aug 2008 Vicki - TWiki.org runs 4.1.1 - what are you running? I'm suspicious that it might not be TablePlugin, rather the core doing something different. - I'm afraid we should contemplate the Urgency of this issue :/ Kicking it up to let Kenneth know (though given the timing, defering to 4.2.2 is likely) -- TWiki:Main.SvenDowideit

- 04 Aug 2008 note. The failure of the spans is essentially cosmetic. What's nasty is that the columns appear to be shifted left so the data is offset. (cell s One One, Two One, and Three One should be in column B but they appear to be in column A . Column D appears to be empty.) -- TWiki:Main.VickiBrown

- 11 Aug 2008 Anyone come up with a fix yet? Or a reason for the failure? Something I can test? -- TWiki:Main.VickiBrown

- 18 Sep 2008 One interesting observation: If you sort the tables by clicking on a column header, the redrawn parts are formatted correctly w.r.t. the table structure (empty cells of a span get filled, though, which might not be desired). In the lower table, the fixed footer row keeps its wrong format. -- TWiki:Main.MarkusUeberall

- 29 Sep 2008 The issue is because of "thead", "tbody" separators. Need to have better algorithm to add this. Currently I just removed those from TablePlugin. Closing this bug - if you really need thead/tbody - please feel free to re-open this bug. -- SopanShewale - 24 Nov 2008 Fixed the test cases -- SopanShewale - 25 Nov 2008 Issue: broken. Reopening the bug. --TWiki:Main.SopanShewale